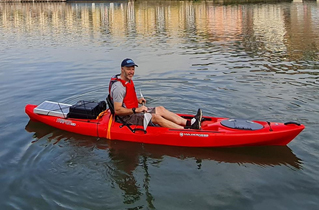 Our MD Rob Stevens is always keen to get out into the field and get stuck into real-life research, earlier this year he went on his own pollution detective mission and throughout September-October has been on multiple adventures. The River Wye and the River Thames have been the focus, the latter supported by The Rivers Trust, a prominent UK NGO organisation whose main aim is to protect and improve the UKs rivers.

The River Wye in particular has been a focus for many organisations including Friends of the Wye, and local rowing and canoeing clubs. Following the damning evidence in the release of the 'State of our Rivers' report by The Rivers Trust, Rob was keen to once again get Proteus in on the action and showcase just how much of an asset it can be.

The Proteus was mounted on the side of his kayak, also connected to a wireless telemetry to allow real-time transmission and GPS stamping of where readings were taken on the river. Readings were taken every 5 minutes for BOD, COD, TOC, DOC, E-Coli, pH/ORP, Turbidity, Ammonium & Conductivity to get a full picture of the quality over a longitudinal profile.

The data collected was truly eye-opening, highlighting not just the areas of worse pollution but the importance of tributary dynamics in both diluting the polluting organic load or even worsening it. Rivers are dynamic by their very nature and to study spot sites in isolation just cannot capture the complex intricacies of organic pollution. Considering not just real-time data in a confined area but real-time data over a longitudinal scale can provide insight as to the influence of many factors on the overall water quality, including the importance of tributary input, Storm Water Overflows (SWOs) and considering river recovery.

Understanding pollution is perhaps more important than ever before given the state of our rivers, where parties are quick to recognise but equally quick to blame which can prevent real action from taking place. In the UK, water companies among others have come under scrutiny in the last 18 months as news of unregulated discharges and overflows became national headlines. In order to work with our most precious resources, we have to fully understand them and this type of flexible monitoring is the key to knowing just how anthropogenic activities truly affect our rivers.

You can view more information on the LinkedIn Posts here and here.